How studying economics in Austria makes a better food scientist 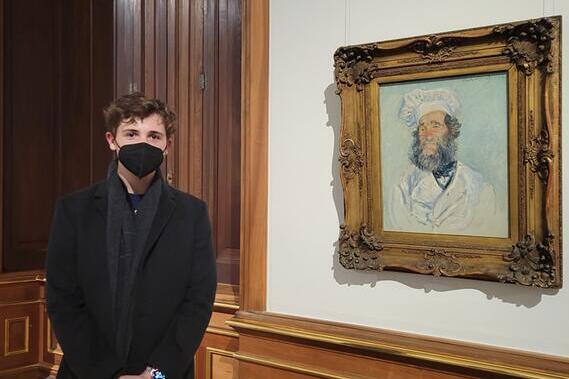 Choosing to study food science in ACES made a lot of sense. Those who have heard me give in depth explanations about what I feed my sourdough starter, my love of beans, or my fascination with the history of the potato would likely also agree I chose an appropriate major.

Oddly enough, I didn’t get the same reaction from my fellow students while studying abroad in Vienna, Austria. In fact, many seemed outright confused when I explained my major. Maybe because I studied abroad not at an agricultural college, but at the Vienna University of Economics and Business Administration.

Growing up with a German grandmother who lived in Austria during her childhood, I heard about Austria, but I did not possess her familiarity with the culture, language, and cuisine. To understand my cultural heritage better, in high school I took accelerated German courses, was a German Club officer, and I wrote and performed in comedic sketches about German politics for local high school competitions. Barring my relatives and a few choice encounters with people from German speaking countries, I had little opportunity to practice this language after I graduated from high school.

When I began my freshman year at the University of Illinois, I knew one thing for certain: I would find a way to study abroad and improve my German. As part of the Illinois in Vienna Program through the College of ACES, I found my opportunity.

In Vienna, I signed up for courses in the German Language, Austrian History, EU/US Financial institutions, Economic History, and Environmental History. As one may observe, this course load is not quite conventional for a food science major. Yet this is precisely why I took these classes. The subjects were different, and so too were the way in which I had to solve problems. Issues in food science can be black and white. Trying to argue against established scientific phenomena, such as glucose being a reducing sugar, is very difficult. Thanks to the flexibility of my study abroad program, I was able to choose courses that let me ponder question that were less black and white. Writing essays, giving presentations, and talking in class helped promote critical thinking within myself and required me to challenge the way in which I viewed history and the global economy. By learning the complexity behind solving modern issues, I returned back home with new skills that prepared me for classroom discussion and understanding potential difficulties when developing food products.

Though I was taking different courses, I still took my love of food with me. The first thing I purchased was a loaf of bread at a local bakery: bauernbrot, a sourdough bread made with rye and wheat flour. Though I had some fantastic meals at local restaurants, what most often fascinated me were the local grocery stores. I would find myself wandering the aisles, picking up and reading ingredient labels, taking a chance on snacks and desserts that I didn’t know existed, and later conducting my own research online to determine the reasons behind these differences. All of this knowledge has proven useful both inside and outside the classroom.

I learned much from my courses and from my personal research on food, but I also found myself constantly learning from the new and unexpected friends I made. Topics of conversation could range from Slovak history and politics while travelling with newfound friends in Bratislava, discussing Russian cinema and video game soundtracks with my roommate, or discussions about my favorite German language indie bands with students from Germany. Being in proximity with such kind and intelligent friends allowed for me to question and refine my personal values, while simultaneously sharing with them my life experiences in the Midwestern United States. Today I look forward to messaging these friends via Whatsapp, and even cooking meals with friends who are now studying abroad at Illinois.

I had a clear vision for my study abroad when I arrived in Vienna. These goals, oddly reasonable to me at the time, included going to the opera, visiting all 9 Austrian Bundesländer, becoming an expert in Austrian cuisine, and developing a conversational fluency in German. As I left, I reflected on these goals and tallied what I achieved in full: going to the Opera. That’s it. While the performance of The Marriage of Figaro was excellent, I outright failed to achieve my other goals. I visited only 3 Austrian Bundesländer, became familiar with only a few categories of Austrian food, and I found myself often fumbling through my attempts at speaking German with others. Oddly enough, I was not disappointed. While not mastering these tasks, when I look back on the ways in which I improved myself, I feel content. All that I gained from my study abroad experience can’t be placed on a resume or my LinkedIn, yet it was full of subtle and important lessons that help me in my everyday life. Whichever way my career will take me, I carry with me a gratitude for the opportunities afforded to me by the College of ACES.

Story Source(s)
How studying economics in Austria makes a better food scientist
Share this article on: