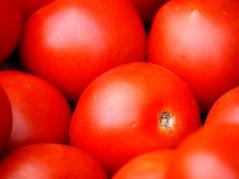 URBANA, Ill. – Years of research in University of Illinois scientist John Erdman’s laboratory have demonstrated that lycopene, the bioactive red pigment found in tomatoes, reduces growth of prostate tumors in a variety of animal models. Until now, though, he did not have a way to trace lycopene’s metabolism in the human body.

“Our team has learned to grow tomato plants in suspension culture that produce lycopene molecules with a heavier molecular weight. With this tool, we can trace lycopene’s absorption, biodistribution, and metabolism in the body of healthy adults. In the future, we will be able to conduct such studies in men who have prostate cancer and gain important information about this plant component’s anti-cancer activity,” said John W. Erdman Jr., a U of I emeritus professor of nutrition.

The U of I team began developing the tomato cultures that would yield heavier, traceable carbon molecules about 10 years ago. Erdman, doctoral student Nancy Engelmann, and “plant gurus” Randy Rogers and Mary Ann Lila first learned to optimize the production of lycopene in tomato cell cultures. They then grew the best lycopene producers with non-radioactive carbon-13 sugars, allowing carbon-13 to be incorporated into the lycopene molecules. Because most carbon in nature is carbon-12, the lycopene containing heavier carbon atoms is easy to follow in the body.

In this first study, the team followed lycopene activity in the blood of eight persons by feeding them lycopene labeled with the non-radioactive carbon-13. The researchers then drew blood hourly for 10 hours after dosing and followed with additional blood draws 1, 3, and 28 days later.

“The results provide novel information about absorption efficiency and how quickly lycopene is lost from the body. We determined its half-life in the body and now understand that the structural changes occur after the lycopene is absorbed,” Erdman explained.

“Most tomato lycopene that we eat exists as the all-trans isomer, a rigid and straight form, but in the bodies of regular tomato consumers, most lycopene exists as cis isomers, which tend to be bent and flexible. Because cis-lycopene is the form most often found in the body, some investigators think it may be the form responsible for disease risk reduction,” Moran explained.

“We wanted to understand why there is more cis-lycopene in the body, and by mathematically modeling our patients’ blood carbon-13 lycopene concentration data, we found that it is likely due to a conversion of all-trans to cis lycopene, which occurs soon after we absorb lycopene from our food,” she added.

The plant biofactories that produce the heavier, traceable lycopene are now being used to produce heavier versions of other bioactive food components. In another trial, phytoene, a second carbon-13–labeled tomato bioactive molecule, has been produced and tested in four human subjects.

“Our most recent project involves producing a heavy carbon version of lutein, found in green leafy vegetables and egg yolks. Lutein is known to be important for eye and brain health. In this case, we began with carrot suspension cultures and have already produced small quantities of ‘heavy-labeled’ lutein for animal trials,” Rogers said.

Right now, though, the Illinois–Ohio State team is excited about the new information the lycopene study has yielded. “In the future, these new techniques could help us to better understand how lycopene reduces prostate cancer risk and severity. We will be able to develop evidence-based dietary recommendations for prostate cancer prevention,” Erdman said.

This new journal article represents the most thorough study of lycopene metabolism that has been done to date, he added.