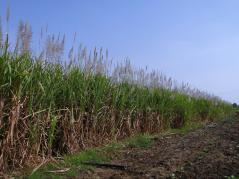 URBANA, Ill.  – In corn and sugarcane ethanol production, bacterial contamination during the fermentation process can result in a significant loss in yield and, consequently, revenue for producers.

A common culprit of contamination is bacterial members of the Lactobacillaceae family, also known as lactic acid bacteria. These tend to thrive under ethanol fermentation. Once these bacteria make their way into the ethanol fermentation mash, they begin eating the precious sugars and producing lactic acid, effectively putting a halt to the fermentation process. And without fermentation, there’s no ethanol.

Although some methods of dealing with contamination—such as antibiotics—are already used in the ethanol industry, researchers at the University of Illinois wondered if they could improve the battle over lactic acid bacteria by having yeast produce a natural, protein to fight the contamination.

They first needed to engineer a yeast that could produce the proteins and attack the bacteria from within. Findings published in the journal Viruses, show that these proteins known as endolysins were successful in helping to improve ethanol productivity and yields.

“What’s important is that these endolysins, these proteins, can effectively kill these bacteria in a very specific and handy way,” says Michael Miller, associate professor of food microbiology in the Department of Food Science and Human Nutrition (FSHN) at U of I, and co-author of the paper. “It’s also very easy or at least conceivable to engineer the fermenting yeast to make the proteins for us, which potentially makes addressing the bacterial contamination a lot cheaper.

“That was another big contribution of this paper, in that we were able to successfully get yeast to make and secrete endolysins, and make it be antimicrobial in the fermentation broth,” he adds.

The researchers’ idea was to bring this protein into the yeast used during ethanol fermentation, by engineering the yeast to produce the endolysin. By cloning the LysA2 (endolysin) gene and putting it into Sacharomyces cerevisiae (commonly known as “brewer’s yeast”), Sacharomyces cerevisiae secreted the endolysin protein during an experimental fermentation trial. When lactic bacteria contamination was introduced, the endolysins attacked the bacteria. “So we are using this natural system to prevent lactic bacteria contamination. We think this is a good solution to antibiotics usage,” Jin says.

Although endolysins have been added to ethanol fermentation before as a purified enzyme, much like adding antibiotics, Miller says their study is the first to report endolysins being made and secreted by the fermenting yeast.

“We show that endolysins have potential to replace antibiotics as a tool for controlling infections in ethanol fermentations,” Miller says. “We’re not saying we’ve solved it, but this shows that endolysins have potential to do that. If you think about antibiotics, they’re very broad spectrum and kill lots of things. They’re pretty indiscriminant, which is sometimes good, but sometimes not what we want.

“In this particular case, these endolysins are much more targeted and so the sweet spot would be if you had ones that were broad enough to kill all or most of the problem bacteria, but leave everything else alone. That’s where we want to be for these kinds of applications,” Miller adds. “These endolysins have the potential to do something like that.”

Jin adds that demonstrating that endolysins can be functionally made in the yeast and secreted in the media may have other applications beyond ethanol production. “This shows us that we could use this idea for many other applications. We are talking about things like how to prevent gut infection, specifically Clostridium difficile infection. We could potentially engineer the use of specific endolysins that would attack bad bacteria.”

Finding was provided in part by a grant from the Energy Biosciences Institute.